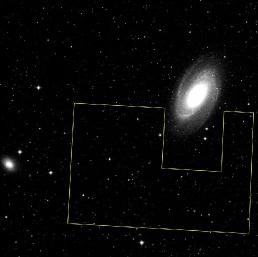 The M81 galaxy group consists of several interacting galaxies, including M81, M82, NGC 3077, and NGC 2976, (the picture to the right shows NGC 3077 and M81). (M stands for Messier Object, and NGC stands for New General Catalogue. Charles Messier catalogued objects in the night sky that weren’t comets or obvious stars, and M81 was the 81st item on his list. The NGC is simply another catalogue of dimmer objects in the night sky, such as galaxies, star clusters and nebulae.)

Scientists are interested in studying interacting galaxies because there is evidence that gravitational interaction can lead to weird galaxy shapes (called peculiar galaxies -- if you want to see some peculiar Galaxies, do a web search for "Arp Catalogue of Peculiar Galaxies"), dwarf galaxies and unusual trails of stars and ISM (interstellar medium -- "Interstellar medium" literally means stuff-between-the-stars; its really just clouds of dust, gas and molecules. ISM sounds more impressive than stuff-between-the-stars though. So now you can sound smart too and say ISM instead.). These stretched out trails are called tidal tails (a good way to think about tidal tails is think of a long trail of stars and stuff that is pulled off from the main galaxy arms by gravity). A group of scientists, Gordon et al. (Anytime you see a name followed by "et al.", it just means that there was more than one scientist working on the project. So Gordon et al. just means that a scientist whose last name is "Gordon" studied something with a bunch of his/her buddies "et al." Get it? Sometimes you see it with a date, Gordon et al. 2004, which just means the paper Gordon wrote with his/her buddies in 2004. Then you go look at the reference list to see which paper they wrote. Now you can look all smart and write that in your papers!) have already used Spitzer to acquire IR images of most of the M81 galaxy. Their data show that the galaxy has tidal tails with numerous bright star-forming regions and lots of cold dust.

Meanwhile, another group of scientists (Durrell et al. 2005; see http://www.astro.psu.edu/users/pdurrell/M81/pr.html for the original version of these images) was studying M81 from Earth (using the CFHT- Canada France Hawaii Telescope). At a visual wavelength, they observed two small 'clumps' of bright blue stars. These are newly discovered clumps in one of the tidal tails of M81! They are so new that we're not even sure what these objects are! They might be newly formed dwarf galaxies or may be stars that are forming outside the galaxy.

These scientists have estimated the age of those clumps at 100 million years old; which is over 200 million years after the date that most scientists think the last main M81 galactic interaction happened. It would be great to be able to compare the optical images of the newly discovered objects with other wavelengths, but unfortunately all of the existing Spitzer IR images of M81 didn’t include the coordinates of the objects found by Durrell et al. In other words, we have IR images of most of M81, but there aren’t any Spitzer IR images of the specific areas in the tidal tails where these new objects are located.

So, when the Spitzer Teachers involved found out about these new objects and the fact that Spitzer didn’t have pictures of them, we decided to write a proposal to extend the area of existing Spitzer M81 observations to include the coordinates of these recently discovered objects. We hope to show that the objects are in fact tidal dwarf galaxies (TDGs). We also want to compare the stellar formation in these potential TDGs with the disk of M81 to determine if the process of star formation is different in debris tails.

M81 is a relatively close galaxy: it’s only 12 million light years or 3.6 Mpc (megaparsecs -- Go grab a calculator: A megaparsec is 1,000,000 parsecs. 1 parsec= 3.26 light years. So if M81 is 3.6 Mpc away it is around 11.7 million light years from us. Wow. That means the light you are seeing left M81 a little less than 12 million years ago! And that’s considered close! The universe is a big place.). That makes M81 (and these little TDG’s) an ideal target for the study of the formation of stars due to galactic interaction. So the real goal here is to compare the possible differences between star formation conditions in TDGs with big galaxies (galactic disks). We are going to use a specific camera on Spitzer (called IRAC) to look for molecules called PAHs (remember we mentioned them earlier?) If we find PAHs in that area, it would mean that we’ve found dust in the debris tails. We are also going to use a different camera on Spitzer called MIPS to estimate the temperature of this dust. Once we have all that data, we will then compare it to the existing observations of M81 by other scientists (Willmer et al. and Gordon et al). If all goes well, we should be able to compare the star formation properties of the TDGs with the galaxy M81. In other words, we’ll be able to compare how stars form inside galaxies with how they form in tidal tails. Neat, isn't it? The M81 project includes five teachers and their students from all over the country! There are five teachers (listed below) and their students (you might be one!) Also along for the ride are two fabulous scientists: John Feldmeier (a collaborator in the Durrell et al. paper, from NOAO) and Varoujan Gorjian (from SSC). Both scientists will be there to help us interpret the data and give us lots of help.

The Supermassive Black Hole in Arp102B