From CoolWiki
(Redirected from What is a mosaic and why should I care?)
Jump to navigationJump to search

What is a mosaic?

A mosaic is a larger picture composed of many smaller pictures. This way, you can get an image of a region much larger than the field of view of a single frame.

Here is an example taken from real life. We'd like to take a picture of some friendly people standing in front of the 200-inch Hale Telescope at Palomar Observatory. But our camera has a relatively small field of view, and we can either take a picture of the people, or the telescope, but not both at the same time. So we take two pictures: 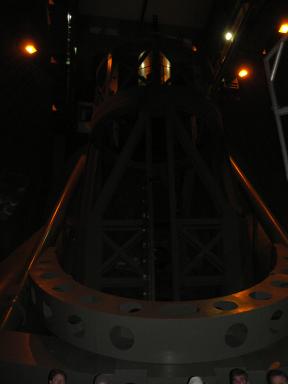 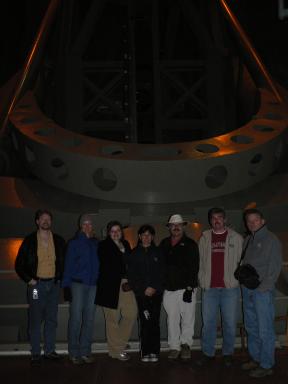 Then, after downloading the images from our digital camera, we use the computer to combine them together into one larger picture, covering the entire region we're interested in. 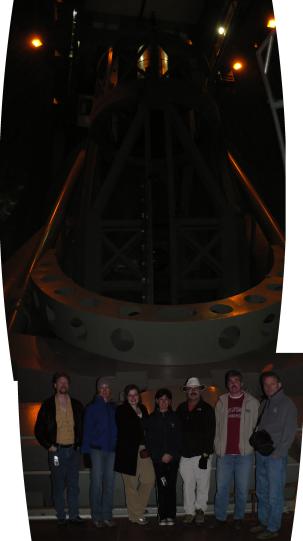 Note here too that the mosaicking process compensated for distortion in the camera -- the edges of the image are no longer a straight line.

Real astronomical mosaickers do this too -- they combine smaller images into a larger image, and compensate for distortion in the camera. The distortion is just (usually) much smaller than what is seen here.

Most of Spitzer's cameras have a field of view that is 5 arcminutes on a side. But, by design, Spitzer is really, really good at covering huge areas. So by taking many, many individual frames, we can combine them all together into huge maps -- Luisa has worked on maps that are more than 10 square degrees, containing about 21,000 individual frames!

In Spitzer jargon, an individual frame that has just been taken is called a Data Collection Event (DCE), or "raw data." After it is processed through the SSC's pipeline, it is called Basic Calibrated Data (BCD). Many BCDs are combined into a mosaic, which is just one of several kinds of post-BCD products.