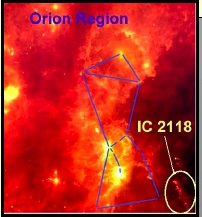 IC 2118, the Witch Head Nebula is a small cloud near the supergiant star Rigel in the constellation Orion. In the image at the right (taken by IRAS at 25 microns), IC 2118 is the structure at the bottom right corner. Rigel appears to be at least partially responsible for exciting and blowing off a significant portion of the nebula in this region. This cloud is about 210 parsecs away, similar in distance to the Orion Nebula Cluster (a.k.a. the ONC, or the sword of Orion). The ONC is a cluster of stars that are so bright that they too may be pushing around the gas and dust in the Witch Head Nebula. The ONC is sort of the "downtown", the "urban" area of star formation - lots of stars close together, lots of things going on all the time. There are so many stars here, so close together, that if we lived there, there would never be night. There are a lot of stars in the ONC!! Our cloud, the Witch Head Nebula, is sort of the "country." There are some things going on here, not a whole lot (especially in comparison to the ONC), but still interesting.

What we are trying to do is characterize the process of pre-main sequence stellar evolution in this cluster. We want to (a) find the young stars, and (b) compare star formation in this cluster with others from different environments (such as the much denser ONC) to see if there are similarities or differences.

Need to continue here with more information on a literature review

In our first observation of this region, we selected for observation by IRAC and MIPS a target area based on the IRAS survey and recent work conducted by Kun et al. (2004). Our Spitzer time was limited so we selected an area of the cloud near the "head" of the nebula that had a known IRAS source and 3 possible new classical T Tauri stars that were identified by Kun et al. In our second observation of this region, we were granted 11.5 hrs to go as far down the cloud as we could. We were able to go about 2.5 degrees down the cloud with both IRAC and MIPS.

to come. include warning that You may need to have a lot of RAM in your computer if you want to load in 3 or 4 of our mosaics all at the same time.

A first look at the catalog with color-color plots

this discussion will center on using color-color plots with the catalog. Need to emphasize here (and earlier) that many of the tools and techniques developed for IC 2118 will work in any other star-forming region observed with Spitzer.