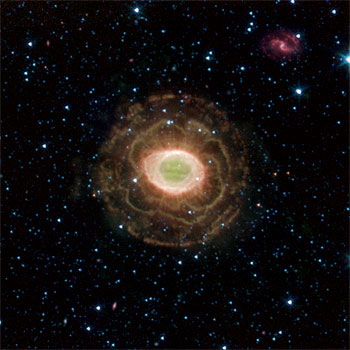 Spitzer's cameras have relatively large fields of view (for infrared cameras), and Spitzer is really efficient at covering large areas of sky. Thus, it is often the case that sources are serendipitously imaged -- for example, galaxies caught in the background of an image of something else. You can do science with these objects.. science that the original astronomer who got these data is not likely to have done!

Things to do with these galaxies

In this case, you can clearly see spiral arms. Here are some things you can do with galaxies you find in Spitzer images. 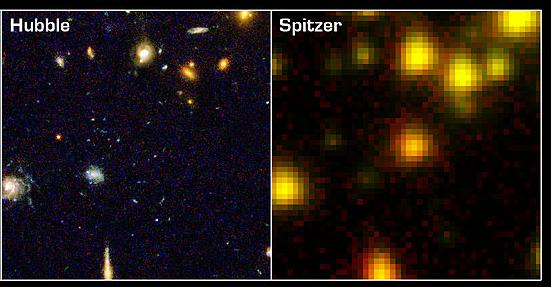 Despite the example above, where you can clearly see spiral arms in the galaxy, not every galaxy is so lucky.

In the picture on the right (taken from this press release), you can see a (small) patch of sky imaged with Hubble (left) and Spitzer (right). The original point of this image was to show how phenomenally sensitive Spitzer is - there is a thing in the center of the Spitzer frame that is not seen by Hubble. There is something else you can learn from this image too. Look at the upper right of the Hubble image. See all the variations in size and shape of the galaxies there? Look at the same region in the Spitzer image. To Spitzer, they all look the same - similarly sized and shaped blobs. Spitzer's telescope is small (just 85 cm) and the wavelengths of light Spitzer uses are long (comparatively), so the resolution of Spitzer is limited. ( see the advanced page for more information on resolution and associated issues.)

Many groups are specifically working to collect Spitzer images of nearby galaxies (e.g., close enough that Spitzer can resolve more than just the nucleus). (For these teams, stars are annoying, ignorable interlopers that they catch by accident!) Two such teams are SINGS, The Spitzer Infrared Nearby Galaxy Survey and LVL, the Local Volume Legacy Survey. SINGS is the older of the two teams, so they not only have a website, but also have delivered back to the SSC images of their targets in Spitzer and many other wavelengths. Go here to search the SINGS data.

Here is a link to Pahre et al., 2004, ApJS, 154, 235 talking about classification of galaxies in the infrared. NOTE THAT this is a real research paper, so it's not sugar-coated at all.