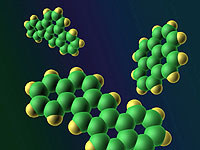 Many astronomers use the Spitzer Space Telescope to detect or study "polycyclic aromatic hydrocarbons," or "PAHs" for short. Spitzer is particularly good at observing this family of molecules. PAHs are considered to be useful indicators of organic chemistry and the possibility for life throughout the universe.

Chemists classify PAHs as "organic" compounds because of their carbon atoms. By definition, any molecule containing carbon is "organic," regardless of whether or not it originated from a biological process. To an astronomer, PAHs are powerful tools for exploring the building blocks necessary for the origins of life in the stars and galaxies beyond the Earth.

What is a "polycyclic aromatic hydrocarbon"?

The term "polycyclic aromatic hydrocarbon" may be a mouthful to say, but it describes a rather basic family of organic molecules. The "hydrocarbon" refers to its composition of carbon and hydrogen atoms. "Polycyclic" indicates that these molecules consist of multiple loops of carbon atoms, while "aromatic" refers to the kind of strong chemical bonds that exist between the carbon atoms. PAHs are actually common in our day-to-day experience. A variety of these molecules are formed anytime carbon-based materials are burned incompletely. They include the sooty exhaust from automobile and airplane engines. They coat the grills where charcoal-broiled meats are cooked. They are the primary ingredients of industrial compounds like mothballs and glue for plastic. Like all molecules, PAHs have a characteristic manner of interacting with light that allows them to be identified from a distance. When molecules are energized, or elevated, to excited energy states, they settle back down by emitting light at very specific colors of light. The exact set of colors is different for every compound, providing a unique "fingerprint" that can be identified even from great distances.

When PAHs absorb photons of light they become energized, causing them to re-emit photons at lower energies. This process is known as "fluorescence" and is the same process by which a fluorescent dye will glow under a black light. In that example, the dye absorbs the ultraviolet photons that we cannot see and re-emits them in any of a variety of visible colors that we can see.

PAHs will fluoresce most noticeably in the infrared part of the spectrum. These infrared colors correspond to wavelengths of light of around 6 to 8 microns (visible colors are about 0.4 to 0.7 microns). While impossible to see through the Earth's thick atmosphere, two of the three instruments aboard the Spitzer Space Telescope are designed to study exactly this part of the spectrum (IRAC and IRS). IRAC allows PAHs to be photographed over large areas, while IRS allows the study of specific locations in greater detail.

The Infrared Array Camera (or IRAC) takes images at four different infrared “colors” (remember that colors in IR means different wavelengths); at wavelengths of 3.6, 4.5, 5.8, and 8.0 microns. PAHs emit strongly at the two longer wavelengths (5.8-8.0 microns), while starlight is strongest at the shorter wavelengths (3.6-4.5 microns). When all four bands are combined together into a single color IRAC image, they are assigned characteristic colors at each wavelength. In these images stars will appear blue and PAHs will stand out as vivid red structures.

Spitzer's Infrared Spectrograph (or IRS) works somewhat differently, instead passing the light from one location in the sky through a prism-like component, splitting it up into a spectrum of colors. The IRS spans a wide range of infrared colors (from 5 to 38 microns), thoroughly sampling the wavelengths emitted by PAHs. By carefully analyzing the spectra, astronomers can more precisely identify the PAH features, and even deduce information about their chemistry and temperature.

What Do PAHs Show Us?

Astronomers have learned that in interstellar space, the processes that give rise to dark clouds of dust, composed largely of silicon (like earthly sand), also produce organic PAHs.

Stars are born deep within dark, dense cores of gas and dust. And while the stars are composed primarily of hydrogen and helium gas, any Earth-like planets in surrounding solar systems will be built from the solid dust and organic compounds in these clouds. PAHs provide a useful probe into such regions, and provide clues to the abundance of potentially life-bearing chemicals.

In nearby star-forming regions, the glowing emission of PAHs can vividly trace the surfaces of these dark clouds and pillars in which stars form. Such clouds are seen in visible light only in silhouette, where they block our view of stars and gas behind them. Spitzer IRAC images, however, allow astronomers to identify such structures clearly and directly.

In galaxies outside our own, PAHs allow astronomers to identify the full extent of the dust structures, often stunningly more dynamic than expected from visible light images of the same objects. These structures help to map out the patterns of star formation and to identify the products of galactic cannibalism and mergers in the galaxies' pasts.

In the distant universe, where galaxies are seen as no more than specks, spectra help astronomers trace out the earliest origins of organic chemistry. Since all of the elements heavier than hydrogen and helium, like carbon, were forged in the hearts of supernova explosions, early observations of PAH features help astronomers understand more about the origins and fates of the earliest generation of stars.